The birth of Iron County was “Rooted in the Resources” – iron, timber, people.
The rush for the “red gold”, we call iron ore, shaped the people and places along
the Penokee Iron Range Heritage Trail from the 1880’s to today. The structures
left behind, such as the Plummer Mine Head Frame, helped to tell the story of the
transformation of the area.

Mining a Mile Down

Mining a mile down, in the world’s deepest iron ore mine, was the livelihood of many residents until the 1960’s.
Montreal Location: From the huge native field stone building that served as the company’s machine shop to
the Hamilton Club recreation center, Montreal Location was a self contained community centered on iron mining. 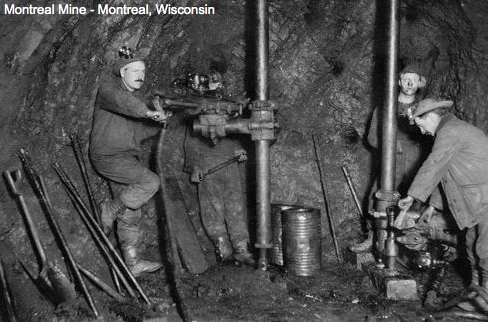 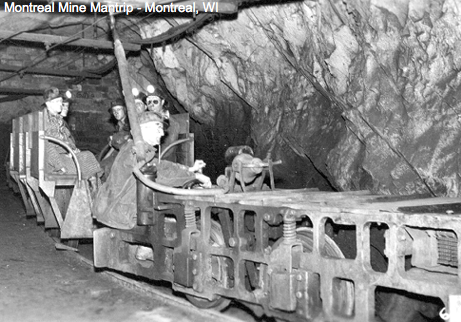 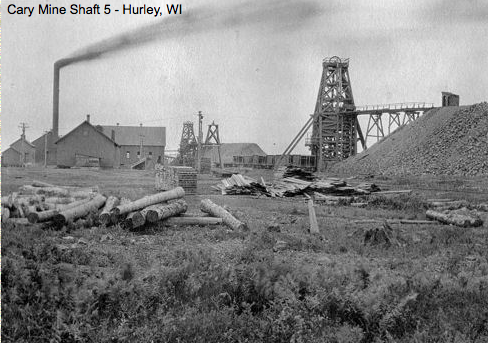 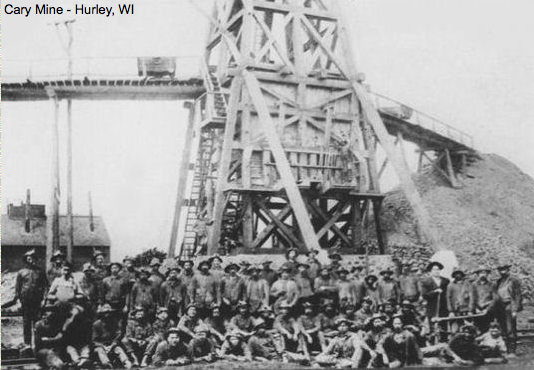 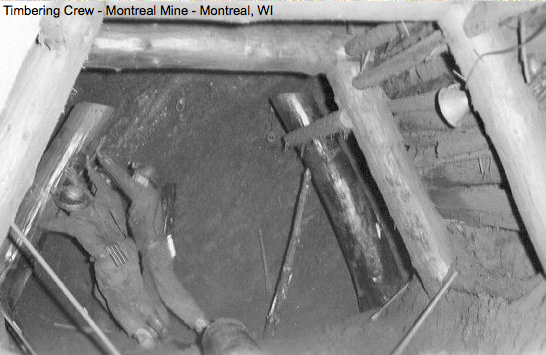 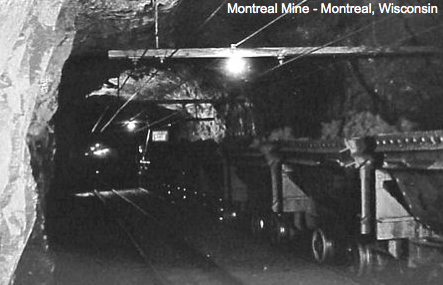 This unique turreted structure was originally built for the Town of Vaughn in 1893.
Today it is home to the Iron County Historical Museum and the area’s most extensive
collection of Penokee Iron Range artifact and displays. Rag rug weaving demonstrations
and sales. Listed on the National Register of Historic Places. Open to the public.
Check out their Facebook page: Iron County Historical Museum 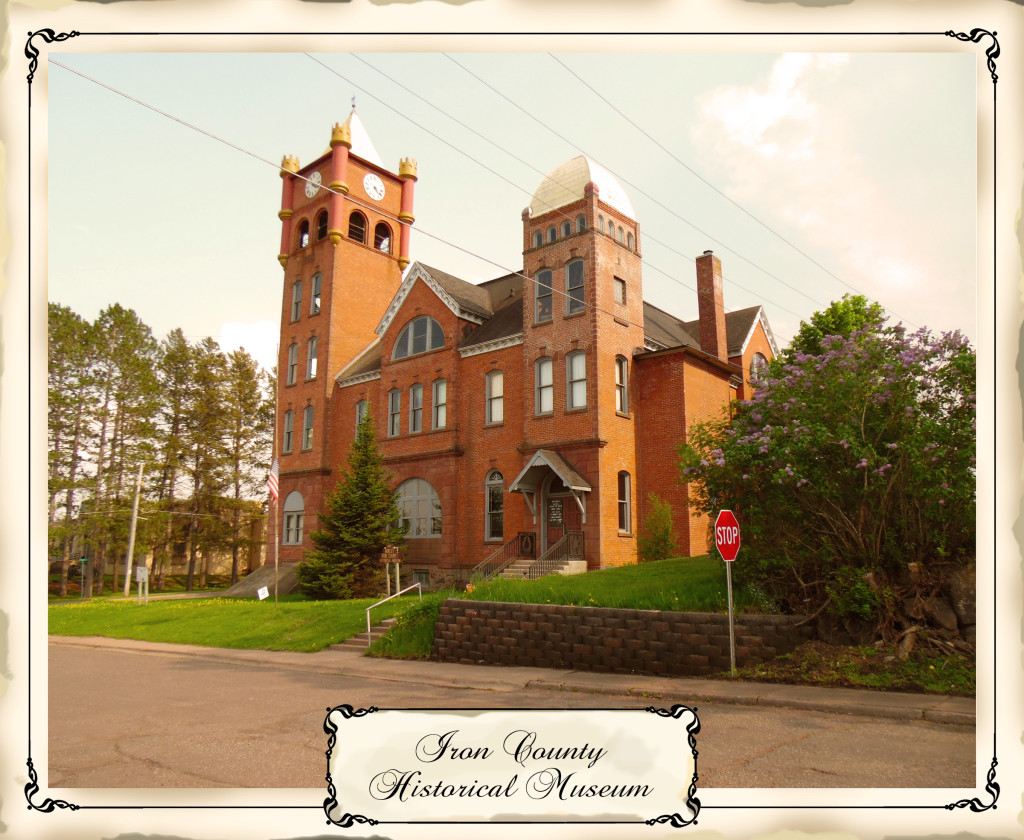 The 80 foot high Plummer Mine Headframe is the is the last standing headframe in Wisconsin,
and is listed on the National Register of Historic Places. These steel giants once dominated the
skyline of the Penokee Iron Range. Today it is the only remaining mine headframe in Wisconsin
and the focal point of an interpretive park that honors the Penokee Range iron miners and their families. 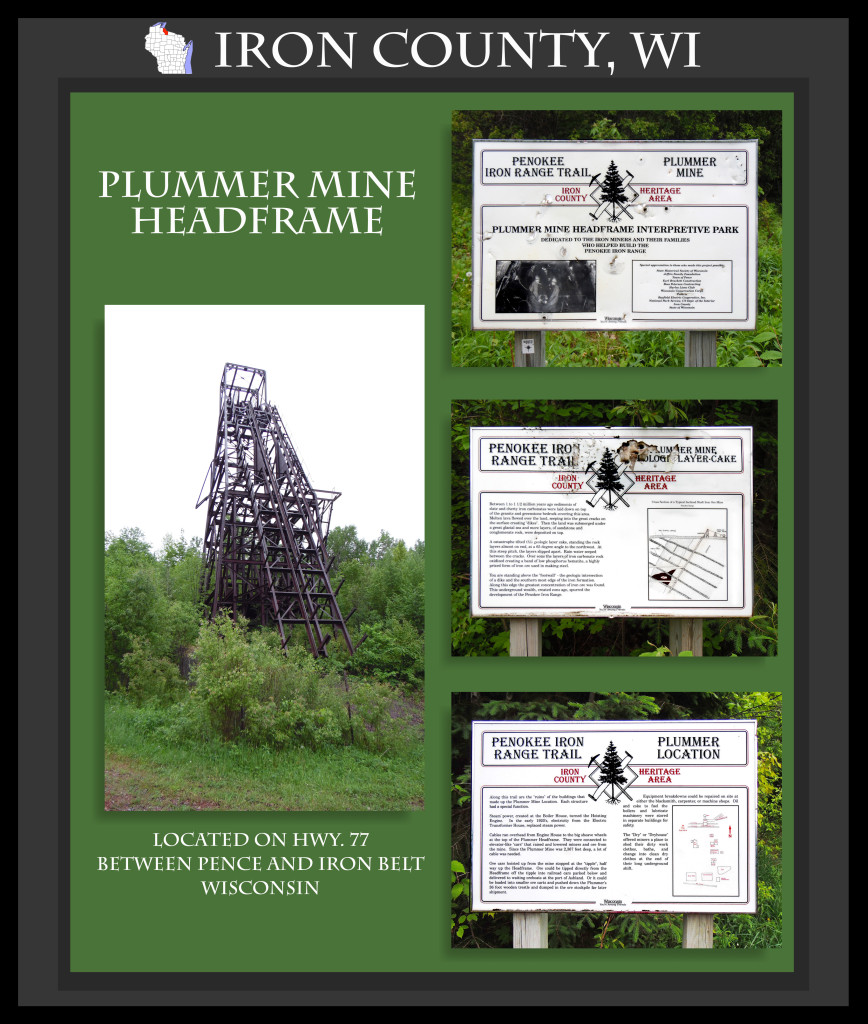 The “art deco” architecture of the Cary Mine Building once housed a working iron mine.
From 1886 to 1964, the Cary produced high grade iron ore that provided steel for a
growing country. It’s closure marked the end of 80 years of iron mining on the Penokee Range.
Located one mile west of Hurley off Hwy.77 on Ringle Drive.

Montreal Company Town: Charming white, "company town" houses line the gently curving streets,
and gracious landscaping mark the City of Montreal—the only planned mining company town in
Wisconsin. Designed in 1921 to accommodate the nationality and temperament of mine workers,
it is listed on the National Register of Historic Places. 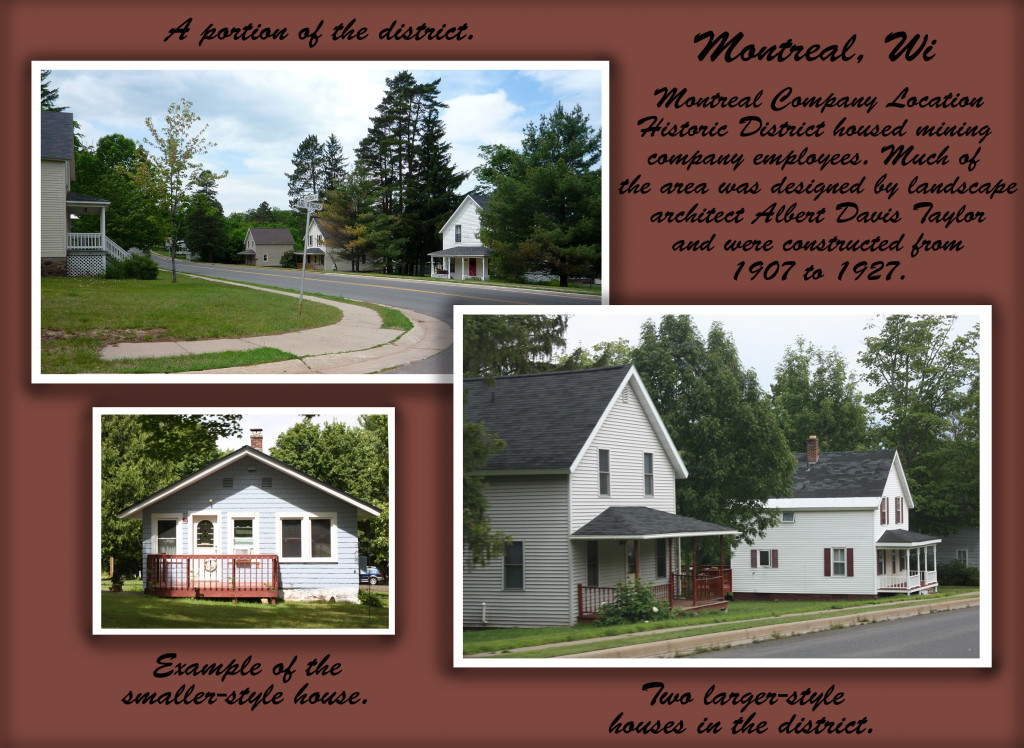 The community of Montreal grew up around iron mining at the worlds deepest iron ore mine,
while neighboring Gile developed as a lumber company town. Hwy. 77 in Montreal. Picnic and
pavilion area along the scenic West Branch of the Montreal River. 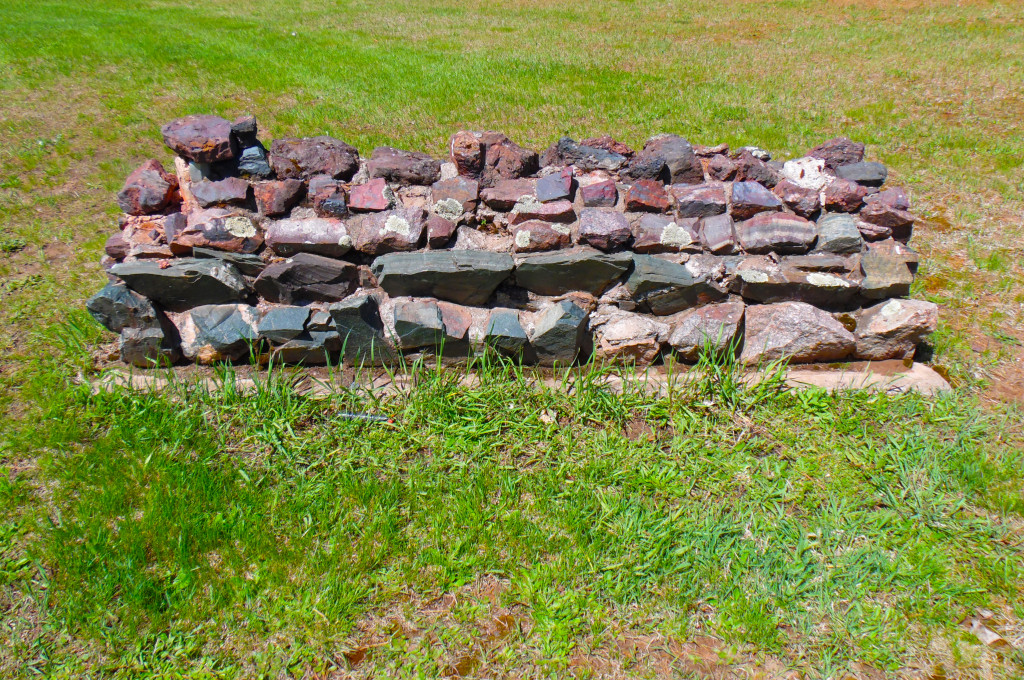 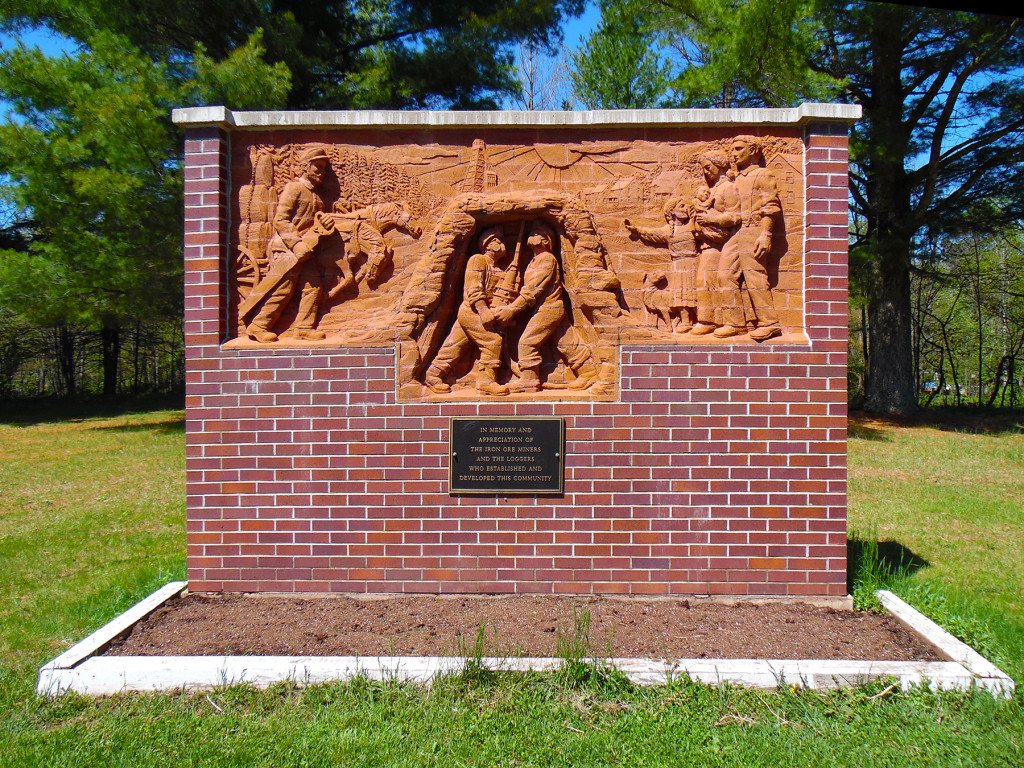 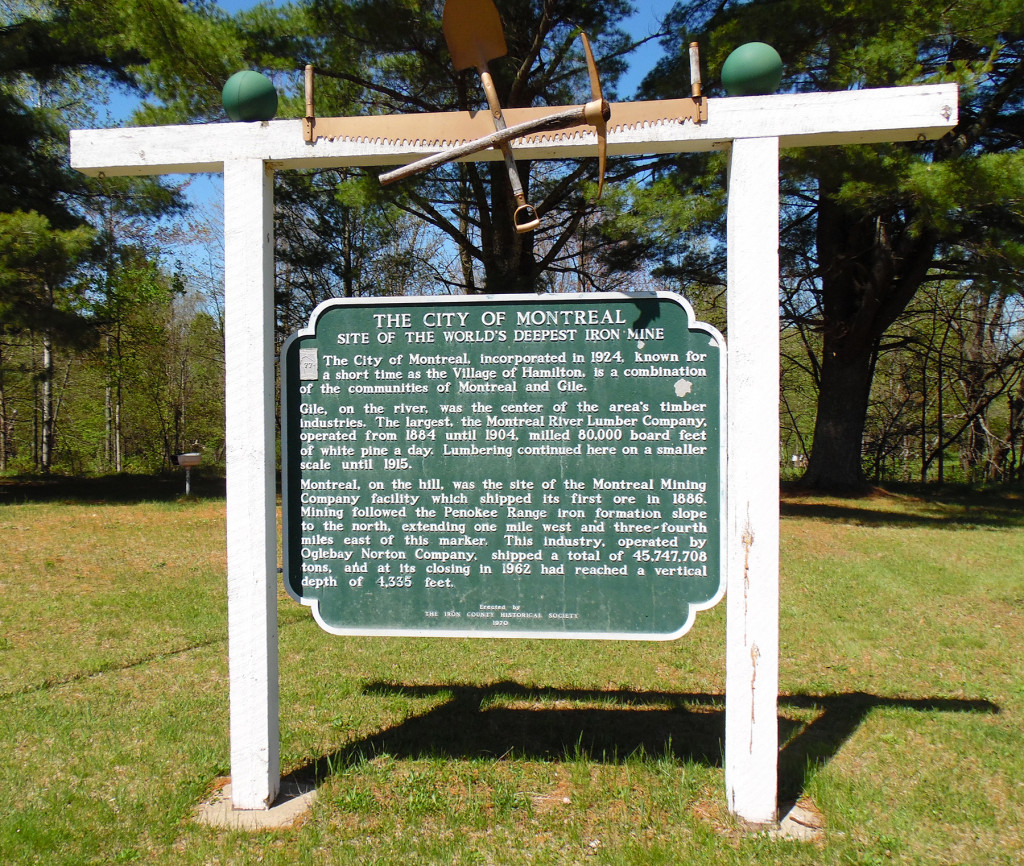 Other Penokee Iron Range Trail Attractions:
Wisconsin Travel Information Center features State historical marker, displays and photos interpret the history of iron mining on the Penokee Range. A unique outdoor sun dial depicts the dawning and decline of iron mining. Cores of solid rock taken from a mine shaft surround the sun dial. State and area travel information. Rest area and picnic sites. Immediately south of the US 2 and Hwy. 51 interchange in Hurley. 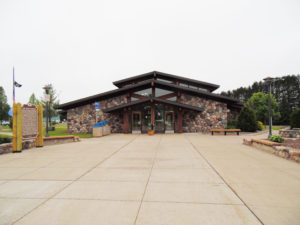 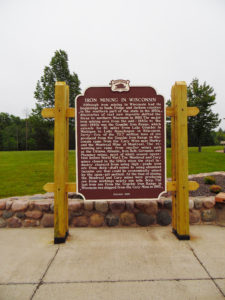 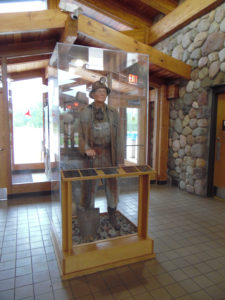 “Hurley, Hayward, Cumberland and Hell”. Early Hurley’s reputation as a boisterous,
lusty town lives on. Famous Silver Street, where saloons and “variety clubs” once
provided diversion for work weary miners and lumberjacks, invites you to discover
why Hurley is still called the “Life of the Northwoods”.
The Iron County Historical Museum was the original town hall for the Town of Vaughn,
and later the iron County Court House. 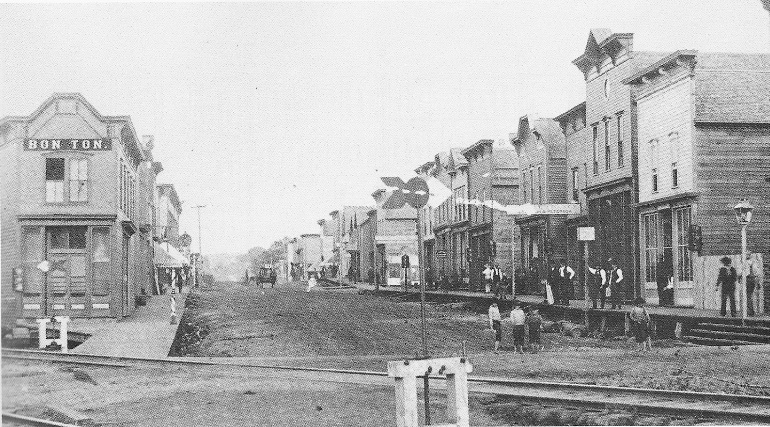 If buildings could talk, they could tell you how the “Lower Block” added a spicy touch to
Hurley’s history. From the street level store fronts that fronted bootleg operations to the
upper level “sleeping rooms” discover how architecture dictated the function and intrigue
of early Hurley. 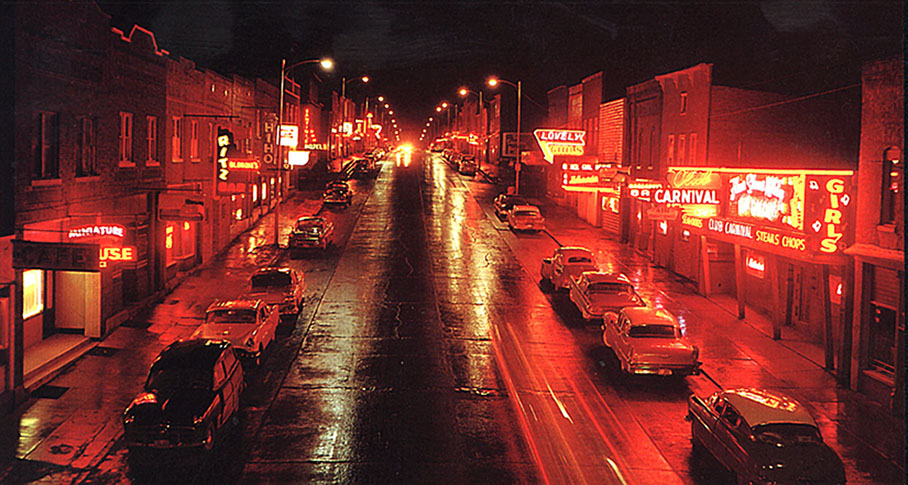 Pence: Over 20 unique log buildings, representing different styles of log construction “handiwork”,
are visible from side-streets giving Pence the greatest concentration of log buildings in Wisconsin
for a community its size. 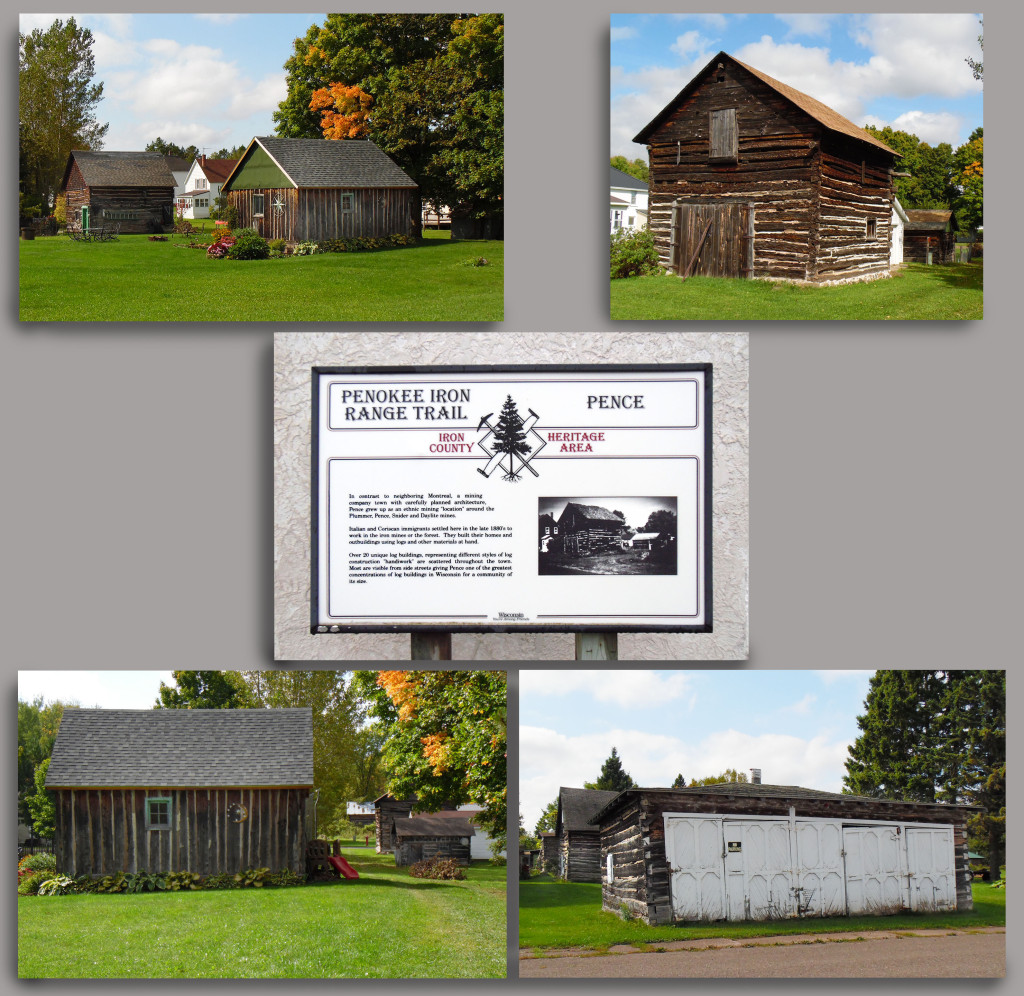 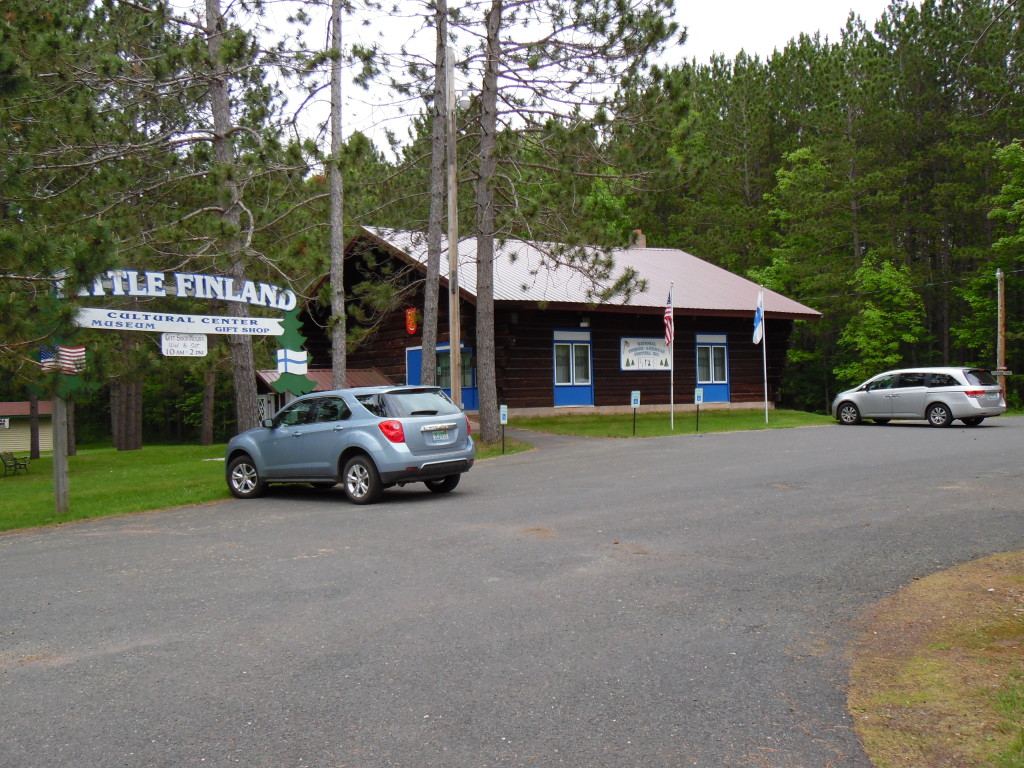 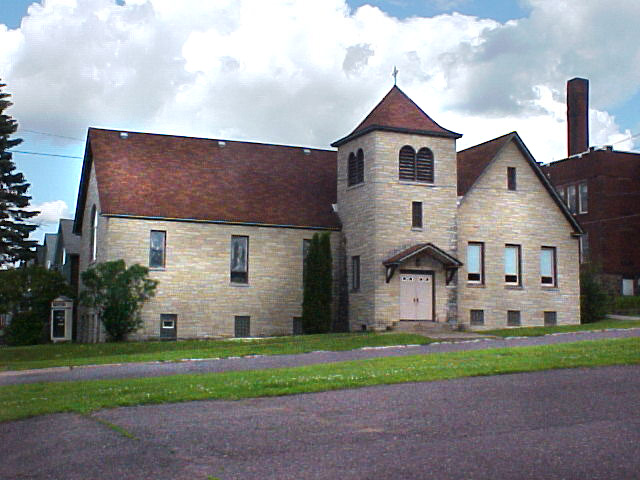 In 1889 travel by rail replaced travel via the Flambeau Trail when the
first passenger train reached Mercer. The Mercer Depot, the only
remaining wooden rail depot in Iron County, has been restored to its
turn-of- the –century quaintness. It houses a delightful collection of
railroad memorabilia and the Mercer Historical Society. Open to the Public. 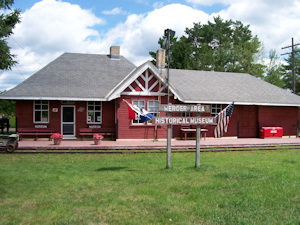 The rugged Penokee Range provides the backdrop for the story of how the
discovery of iron ore shaped the area’s history. On U.S. 2, 12 miles west of Hurley.

Eagle Bluff Scenic Overlook: A spectacular vista of two states and Lake Superior.
South of U.S. 2 on County D at the Eagle Bluff Golf Club, one mile west of Hurley.

Annala Round Barn: The only barn in Wisconsin entirely made of massive field stones.
Built in 1917 by Finnish master stonemason Matt Annala, it is privately owned.
Listed on the National Register of Historic Places. One mile north of the corner of
Dupont and Rein Roads, five miles south of Hurley. 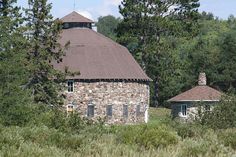 Travel the same water routes used in the 1600s by Native Americans and Fur Traders for transporting their goods to markets around the world. Historic Guide Map To Canoe/Kayak Routes in Iron County, Wisconsin (Historical map graphic) Iron County was designated a Wisconsin Heritage Area by Governor Tommy Thompson in 1994. Its rich history played a significant role in establishing Wisconsin's place in national and international trade as the State was settled.

The beaver hat rage in Europe opened up international trade routes in the county as early as the 1600's. Later, iron ore mined in the region fed the growing automobile industry. Iron County's unique history is "Rooted in Resources," not only the resources found in the iron ore mines and the lush forests, but in the people who settled the region opening up Wisconsin's Northwoods for the future.

The Flambeau Trail surfaced as the key transportation route for Native Americans centuries before white exploration. Later, the Flambeau Trail hosted voyageurs, fur traders and settlers during their journeys through out the region. The Flambeau Trail crossed the Continental Divide linking Lake Superior and Mississippi watersheds. The trail connected two important Native American Settlements, La Pointe, on the shore of Madeline Island, and Lac du Flambeau, inland to the South, which be came centers of fur trading commerce.

North of the Continental Divide, rivers contained natural barriers as they flowed north to Lake Superior, making travel by canoe impossible. On this section of the trail, travelers portaged goods 45 miles. South of the Divide, rivers flowed freely to Lac du Flambeau and the Mississippi, offering easier water transportation routes.

This 3,384 acre flowage was created in 1941 by damming the West Branch of the Montreal River. Fishing, boat launch, swimming, play and picnic area at Gile Town Park. South of Hwy. 77 in Gile. 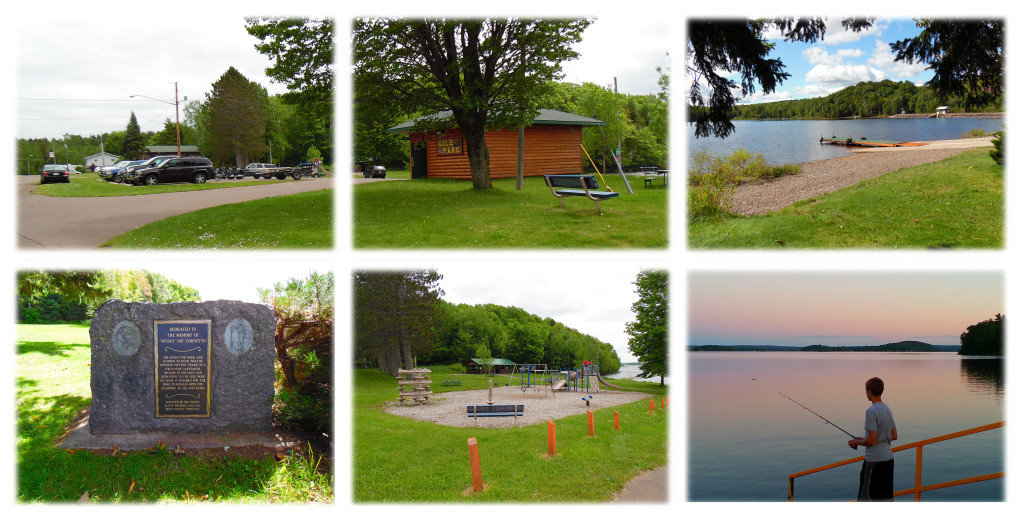 To request a "Heritage Area Map" go to the:  information request page.