Travel Water Routes used in the 1600s by Native Americans and Fur Traders! 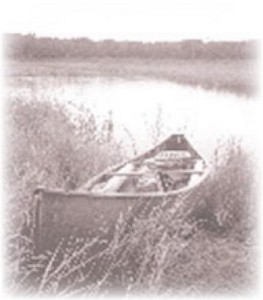 Consider this thought, still very appropriate today, from the diary of Andrew Rundell, 1846, as he stood on Lake Superior's shore.

I had been accustomed to seeing the sun above me, but now it was between me and the water -
on the water and under the water, and now the sun sleeps in Lake Superior -
and so we too come to the end of a perfect day, made so by those in the past planning for the future which for us is to day and from now on.
Let us make the most of it, but jealously guard what we have so we can pass it on
to be enjoyed by those who will follow in our footsteps." 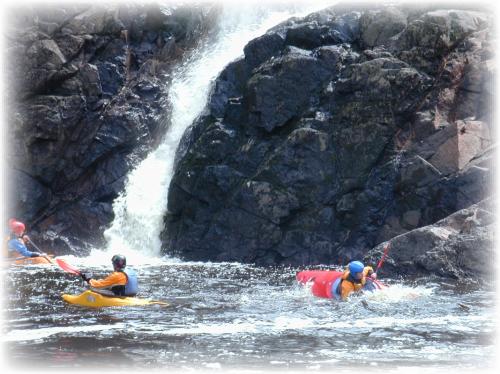 After crossing miles of open water, the Flambeau Trail parallels Wisconsin's "North Coast" following a narrow sand split called Long Island. This land is the home of the Bad River Band of the Lake Superior Chippewa Indians. About the time Columbus "discovered" the New World, the Chippewa people came to the long, narrow, sandy strip of land they called Sha-ga-waun-ik-ong. After leaving the area for a short time, they returned. By 1650, they had established settlements on the Apostle Islands and extensive trading networks that branched out from here.

The Bad River Reservation was established in 1854 along this coastline, preserving important wild rice and fishing grounds for the people.

The shoreline changes along the coast from gentle sandy beaches to steep red clay cliffs. At special sites along this route, small rocks called "concretions" are found. Made of clay and sand, they take on a variety of round, marble like forms. They are unique to this area of Lake
Superior. Agates are another rock-hound's treasure to look for.

The American Fur Company operated a fur trading post (at Saxon Harbor) and a fisheries station was started by traders in 1824. "A little above this river on the lake shore there were several lodges of Indians on a piece of level ground bounded on three sides by mountains through which a creek runs."- Otis Bersing, WI Academy Review.  Those "mountains" were the steep banks made taller by the virgin trees. The three sides had two valleys. One creek is now know as Parker's Creek and the other is the Oronto Creek.

Stick close to the shore on Lake Superior. Bad weather is known to come up quick and Lake Superior can become extremely rough with waves over 10 feet high. Beginners should not venture out alone.

Canoeing/kayaking routes can be found on our "Iron County Sportsman's & Recreation Map":
Request one here Contact Us.

Additional information about surrounding area kayaking/canoeing events can be found at:
http://felivelife.org/